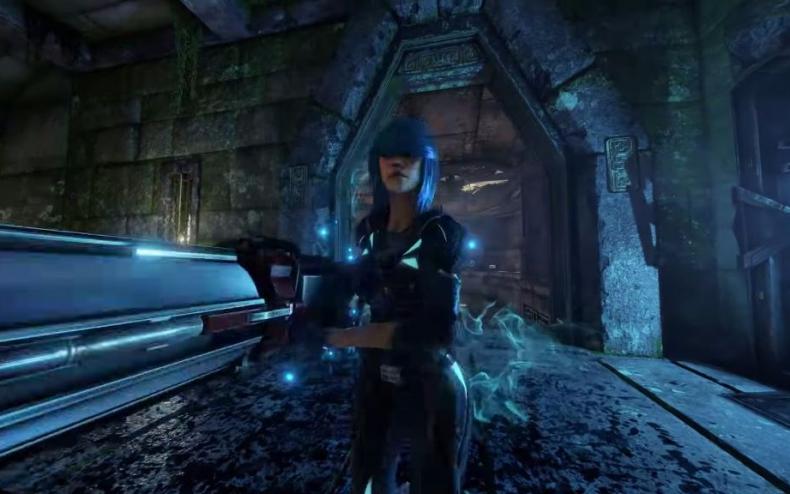 Bethesda Softworks has revealed new details today for Quake Champions, including a look at the new game roster Champion, Nyx. Additionally, sign-ups for the game’s Closed Beta are open now at Quake’s official website. You can also check out the new trailer for the Nyx character in the player below.

Nyx is a character who will give players speed and subterfuge with abilities that showcase her movements and skills. Also, the character will be playable at the demo for the game at PAX East at the Bethesda booth (#18007 and 20007). More details on the lore for her character in Arenas in an updated Champion Profile page at the above link.

Quake Champions is due out later on for Windows PC. The Closed Beta is set to start in the coming weeks. Here are the official stats for Nyx (Courtesy of Bethesda):

Active Ability — Ghost Walk: using the Ghost Walk Active Ability moves Nyx into another dimension, instantly making her invisible and immune to damage. Players can use this ability to escape tough battles, maneuver unseen behind unsuspecting enemies, or even avoid damage from incoming projectiles. Re-materializing in the same spot as an enemy will result in an instant Ability Kill.

Passive Ability — Wall Jump: Nyx’s Passive Ability extends her mobility by allowing her to jump twice – once off the floor and another time off of a nearby wall. Wall Jump can help players traverse wide distances between heights or gain the upper hand in a showdown with foes by creating more space to aim and frag.