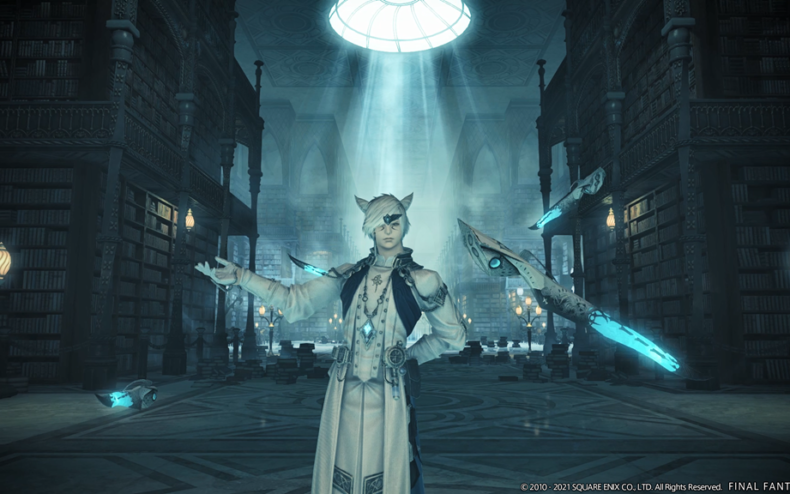 Final Fantasy XIV has been around for a while and you might be thinking…you’ve always been curious, but is it too late to get involved? Would the barrier of entry be just too high at this point — and what about the community? Most of these fears are unfounded.  Final Fantasy XIV may not be as simple to leap into as it was ten years ago on its launch day, but it won’t take long to settle into its world if you have a little advance info. So we prepared this guide to give you a few valuable opening tips…

In the previous chapter, we discussed creating your character, choosing a class, and deciding where to start in the storyline. Now we’re going to get into the meat of the thing — how the game plays and what to expect from it.

The best way to play through the game is to just follow the main story path and go wherever it tells you to travel next. You’ll earn the experience the game expects you to learn and obtain items than are more than adequate for what you’ll face next. Feel free to stray from the well-traveled path every now and then, but keep your goals in mind. The best way to amass daily experience is through the Duty Roulette, which unlocks at the end of clearing your first dungeon. If at any point you DO find yourself under-leveled, you can grind up though playing Full Active Time Events on the map (yes, that spells FATE, they’re being cute).

You know how some games have landmark markers that you have to touch in order to teleport to them later? That’s how it works in FFXIV too, in the form of Aetherite Crystals. They’re gigantic and can’t be missed, and if you don’t “attune” yourself with each one you come across, you’ll be sorry later when you have to travel that direction all the way on foot. More missable, but equally important, are Aethernet Shards, which are scattered throughout cities and will let you insta-surf your way across them assuming you interacted with them earlier. As you level up you’ll also gain the ability to ride mounts, such as Chocobos, which are handy in those situations where you haven’t synced up with the Aetherite yet.

Can you join a guild? You sure can, if you know what to look for — in this game they’re called “Free Companies.” This is something you should definitely think of doing as soon as it’s available, because there are advantages to guilds — or “Free Companies” — that you can’t get any other way, like special items or extra experience points.

There are plenty of things to mess around with in FFXIV, but to move the story along, you’ll have to attend to “duties,” or instances to use the general MMO term. Duties typically involve exploring a dungeon with exactly three bosses to defeat (never more, never less), facing trials (just one boss, but a tougher one that requires eight players to defeat), or raids (bigger versions of trials). Raids come in sizes from small to epic, moderate to punishingly hard. Some raids require as many as 24 people (three teams of eight) to beat.

Some story cutscenes are skippable, but there will be times when you get to a quest that’s so crucial to the main storyline that no cutscene can be avoided. In Realm Reborn there are two such places: Castrum Meridianum and the Praetorium. Fair warning, because once you enter, you’ll be doing a lot more watching than playing.

Eventually, as you get settled into the game’s groove, you’ll want to get involved in some of the extraneous activities like side questing, mastering professions, or collecting special items. These are things you don’t need to worry about immediately, but you may consider in the future. It’s even possible to own and design a house in FFXIV, either for yourself or for your guild, then leave it open for others to explore Animal Crossing style…though there are some plots of land where competition is fierce.

So what’s next? In the fall of 2021, Square Enix will be introducing a fifth MSQ to the game: Endwalker. The company has hinted that it will be wrapping up the entire storyline introduced in A Realm Reborn, though that doesn’t necessarily mean this will be the last chapter ever — they also claim “Endwalker will mark a new beginning for the beloved MMO, setting the stage for new adventures that longtime fans and new players can enjoy together.” We’ll have to wait six months to find out what that means. It’s worth noting Square kept this game’s predecessor, FFXI, going WAAAAY after its main storyline had concluded.

In addition to story, each expansion brings with it new jobs, new gear, new baddies, new overworlds and dungeons, and a higher level cap. The cap on levels is currently set at 80; Endwalker will expand it to 90. Sometimes special events will occur that assume players have made it this high, but don’t feel left out — there’s a reason for that requirement as they are always super-tough boss battles you need to be leveled up to live through.

The final tip is to just have fun. Otherwise why would you be there? Relax if you make a few mistakes along the way — it’s only natural. Just get out there and start slaying beasts. The world of Final Fantasy XIV awaits!