Cool info on No Man’s Sky 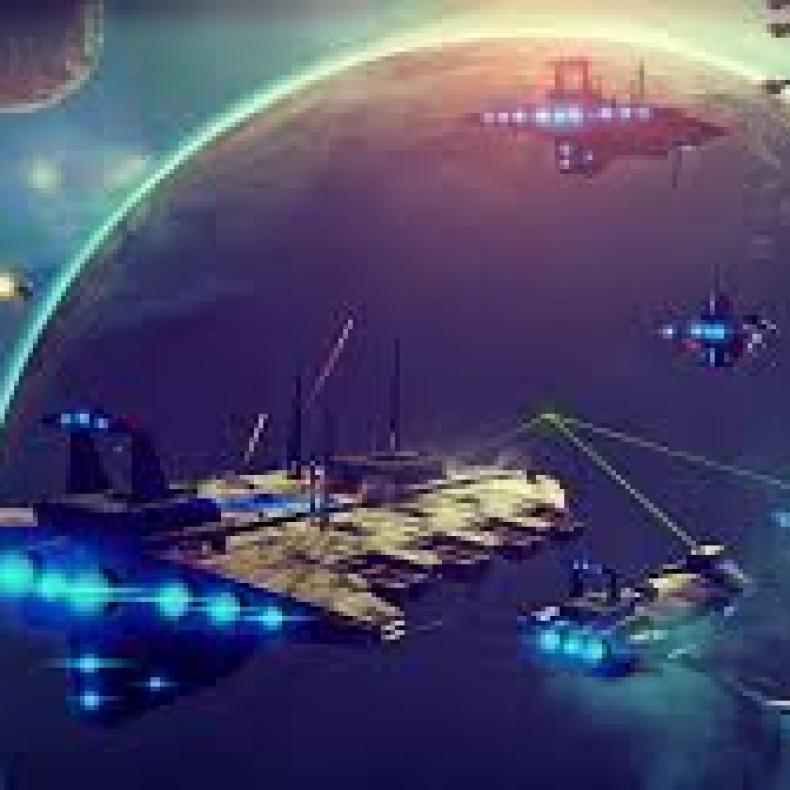 The universe isn’t random. Everything exists for a reason, and is governed by maths. Maths means every detail is always consistent and makes sense, the result is hundreds of rules made to make a sci-fi universe you’ll want to explore. And anyway, computers just aren’t very good at random, either. The universe isn’t stored on your hard disk or on a server somewhere. The world around you is generated by your PS4 at the point you visit it. Leave and it’s all thrown away, but if you return it is generated again exactly as it was. This also means the game will be completely playable offline. No Man’s Sky isn’t an MMO. The sheer size of the universe means that everyone is going to be super far apart, and it’s super unlikely that people will even visit the same planets. There are bots exploring the universe right now. They have sent a set of bots out into the void to send back to us gifs of planets. We can quickly review the gifs, lots at a time, to see what kinds of things are out there, and ensure it’s varied and interesting.

There isn’t a story to follow. There are no cutscenes or characters, but there is a big objective: getting to the center of the universe. They don’t want to tell you a story, they want you to tell your own. No Man’s Sky is about your journey. You will make true discoveries. Be the first to visit a planet, or be the first to scan a species of creature, and you will be recorded as its discoverer when you upload it at a beacon for all the world to see. You can also choose to name them. (There will be filters!)

The Atlas is everything everyone has ever discovered. The No Man’s Sky symbol stands for the database of all the things that players have discovered and chosen to share with the world. It’s perhaps the most important thing in the universe, and will contain findings that even the devs have no idea about. You’ll find ancient artifacts and crashed ships. They may lead to you discovering new technologies, which can give your ship, suit, and multitool new or improved abilities. A jetpack is an explorer’s best friend. It can get you out of all sorts of trouble, and take you to places you wouldn’t otherwise be able to access.

Planets are defined by their position in space. If they’re close to their sun they’ll tend to be more barren; further away and they’ll tend to be cold. The planets in between tend to be richer with life. Most planets are barren. Few planets will be dense with plant life and animals. Most will be barren, but even barren planets can be sources of great wealth.

Planets can be toxic. Some planets are death traps, with radiation or other hazards that will kill you in minutes. To survive you’ll need to upgrade your suit. Every distant mountain is a real place. No Man’s Sky doesn’t only generate the environment immediately around you. It also generates the whole planet at a lower level of detail, so every distant object on the horizon is a real place that you can go to. Planets have days and nights. Fly down to the night side of a planet, and you’ll find the land in darkness. Different creatures will be awake while daytime creatures sleep.

It’s worth upgrading your ship. Ships offer varying capacity for being upgraded, whether speed, maneuverability, jump drive range, or weapon power. You can only have one ship at a time. Choose a ship that suits what you want to do, whether trading (large cargo capacity), fighting (good speed and weapons) or exploring (a long jump drive distance). Want to do something new? You can always get a new one. You’ll shop for new ships. Space stations sell a rolling stock of ships. If you see one you want, you’ll need to grab it before new stock comes in.

You won’t be left without a ship. If you die and have no money, a basic ship is always available for free. It won’t have a hyperdrive, but you’ll be able to fly to planets again to rebuild. You need fuel. You can fly for as long as you like in a star system, but to make jumps between systems you’ll need hyperdrive fuel, which you can buy from space stations or mine from planet surfaces.

You can get a wanted level. Upsetting the balance of planets by mining them too heavily or killing creatures will see you being hunted down by the Sentinels, and attacking craft in space will attract the attention of the police. The more you do, the stronger they will retaliate.The Sentinels aren’t everywhere. Not every planet is policed, making these lawless playgrounds valuable sources of resources. Space is not quiet. Factions constantly vie for territory across the entire universe. Choose to help one faction and it may reward you. Attack another and it’ll remember. But you can also try to avoid conflict completely.

You can side with factions. If you’re friendly enough with a faction, it can provide you with support that might protect you as you face its rivals. Your multitool is an adaptable weapon. Multitools have a basic firing mode, but some come with different, more powerful attacks, or you might find technologies to upgrade them. Death isn’t the end. But it’s a problem. If you die on a planet, you’ll find yourself revived back at your ship having lost what you hadn’t stowed and discoveries you hadn’t uploaded. If you die in space, you find yourself revived at the nearest space station, without your ship, items and discoveries.

Planets are populated by unique creatures. Creatures are procedurally generated, with wildly varying shapes, sizes, colorations, and behaviors. You will discover countless new species on your journey. Animal calls are procedurally generated. They’ve created special software that models throats, allowing animal calls to be defined by the shape and sizes of their bodies. Every planet’s soundscape is unique. Animals may attack you. But think twice about retaliating. If Sentinels see you kill a creature they’ll attack you. It’s often best to try to scare creatures or run away, and preserve the natural balance of the planet.

Animals follow daily routines. They will go down to bodies of water to drink and sleep at night, while others will only come out at dark. Some animals hunt others. You’ll see food chains in action, with species being predated by others. You might find that you’re far from being at the top of the chain.

Things about the economy

Units are the universe’s currency. You’ll earn Units for many things: selling resources at trading posts, shooting down pirates, uploading discoveries to the Atlas. Market prices for resources vary. You might find lucrative trade routes, mining in one system and selling in another. It might be worth investing in a ship with lots of cargo space to take full advantage. Space is busy with trade convoys. Freighters, led by capital ships, steadily travel along trade routes, sending ships down to trading posts as they go. You can choose to attack them and steal their resources, but you’ll find them heavily defended, and pirates might have the same idea…

Resources aren’t just for trading. You’ll need them to craft technologies into upgrades. The rarest resources can only be found in certain types of systems. Efficient mining requires certain upgrades. Your multitool can always destroy resource crystals, but you’ll need to upgrade it to mine resources held in harder rock. Perhaps there are technologies that will provide greater yields…

Things about the game

It has amazing music. 65 Days of Static make No Man’s Sky’s soundtrack album.

The music will be procedural. 65 Days of Static’s soundtrack will be used to generate procedural music that’s influenced by where you are and what you’re doing. Full songs will play at specific points, but it’s up to you to discover when and why…No Man’s Sky was inspired by classic sci-fi. Especially those amazing, vibrant book covers, which presented a vision of a future that wasn’t grim and in which technology and exploration were points of hope. Four people built what was showed for the announcement. Since then, the No Man’s Sky team has grown, but only a little, to 13 people.

No Man’s Sky and VR
Be the first to comment!
Leave a reply »