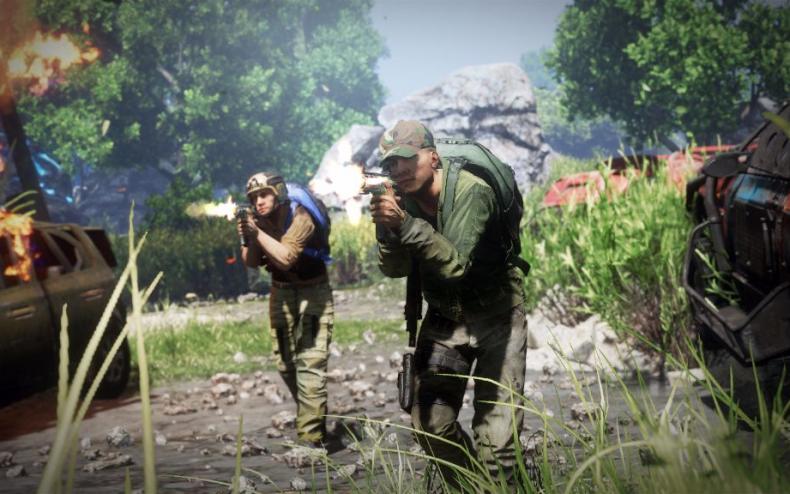 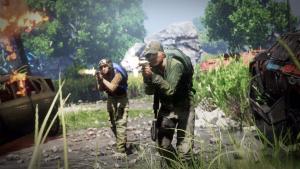 Shattered Skies is self-described as a “global open-world looter shooter,” where players are expected to have one account, one character on one persistent world map worldwide. This from Sergey Titov, the man that brought you sub par games like Big Rigs,  and the controversial zombie survival Day Z rippoff, War Z, also known as Infestation: Survivor Stories after a court ruled it was too similar to the name of a zombie movie releasing around the same time as the alpha version of Titov’s game.

Though Shattered Skies is built from the bones of previous survival games, Titov says that 80% of players of their previous survival titles wanted to play PvP and dropped back the heavy crafting and constant nourishment requirements to 10% of what they’d had in previous games. As a looter shooter, upon being killed, you lose all your gear, so the game is constantly challenging the player to question how much they can collect, versus how much they need to store either at a safe faction base or persistent safe storage out in the wild.

Where the game does have survival or crafting elements, Titov stressed that they should enhance the gameplay. Breaking down trees to make basic weapons wasn’t very useful in a game where people mostly wanted to shoot each other with guns, so crafting had to be supplemental. He used a sandwich as his primary example, saying that you could find bread, meat, and cheese separately in the game and eat all three for some nominal food points, but crafting them into a sandwich would yield far more.

A campfire could allow you to address medical conditions that might go away over time, like cauterizing a wound in the fire, which would solve bleeding, but immediately drop some HP. Using a campfire this was, though, isn’t entirely necessary. A player’s skill at crafting also determines where items can be crafted, with some items needing a crafting bench, but the requirement can be waived at higher levels.

In the pre-alpha build, Titov and senior game designer Adam Skidmore have been working on the game, in an exclusive demo, they played moving as a team of two and using a lot of resources, with a crashed helicopter on the roof. Skidmore was killed by raiders who wanted their gear, but was able to respawn on Titov, albeit without weapons or armor, and help him fight off attackers and loot the building. Crafted barrier-defenses lined the stairs, and Skidmore told me that you could reinforce the doors and windows to turn any building into a fortress. However, he also popped up the fire escape to show me holes in the roof through which raiders could attack. No place inShattered Skies is completely safe.

Not just from other players either, Skies has a PvE element as well. In the game lore, the moon has had a chunk of it torn out by a large asteroid, with some of the fallout hitting Earth. Some of the foreign bodies are mist-shrouded meteorites, the work of an alien race attempting to terraform the planet for their use. Skidmore and Titov showed me one of these environments, and told me that playtesters who’d tried the PvE elements of the game had referred to the overall gameplay as “Player Versus All,” due to the PvE and PvP elements all taking place in the same world. Skidmore and Titov mentioned alien boss fights as a game element—and that one could wreak havoc by summoning a boss in the middle of a clan-war—but he clearly wanted to focus more on what was present in the build with the PvP and looter-based shooter mechanics.

PvP has its incentives. Being the first person to fire on another player drives up your experience point value to other players for a limited time, making you a target and also pinging you visibly with a short pulse for other players to learn where and what you’ve done. Of course, if you attack a player with that temporary point bonus first, you have the same target put on your head. You could seek shelter in one of the game’s three faction safe zones, from which you could also receive missions and purchase goods.

Experience unlocks better equipment, though in the test all the weapons were lower level, and at one point Skidmore passed over a customization screen and I asked him to go back to it. Customization enhances certain weapon attributes while lowering others; something that increases weapon stability could lower damage. These shifts in values applied to armor as well, which might be good against one weapon, but be totally shredded by another, necessitating you to take care to know what you might be walking into.

Shattered Skies looks like a competent MMO third-person shooter with an apocalyptic setting, and PvE elements. It’s still early, but the looting-based gameplay appears strongly competitive and seems like it will encourage team and clan-based co-operative gameplay. Titov and Skidmore are building on what they’ve learned from prior games in the genre and implementing that in their new title; but with Titov’s notorious history, the game will be a tough sell to those who remember The War Z. Serial keys for the game are being sold on Free Reign’s site, with tiered pricing for additional starting items, access to the alpha and beta tests, and other games currently in production for the developer/publisher as they become available.

Battleborn Has More Resources Than Both Borderlands? Find Out What Gearbox Means Here!
comments
Leave a reply »