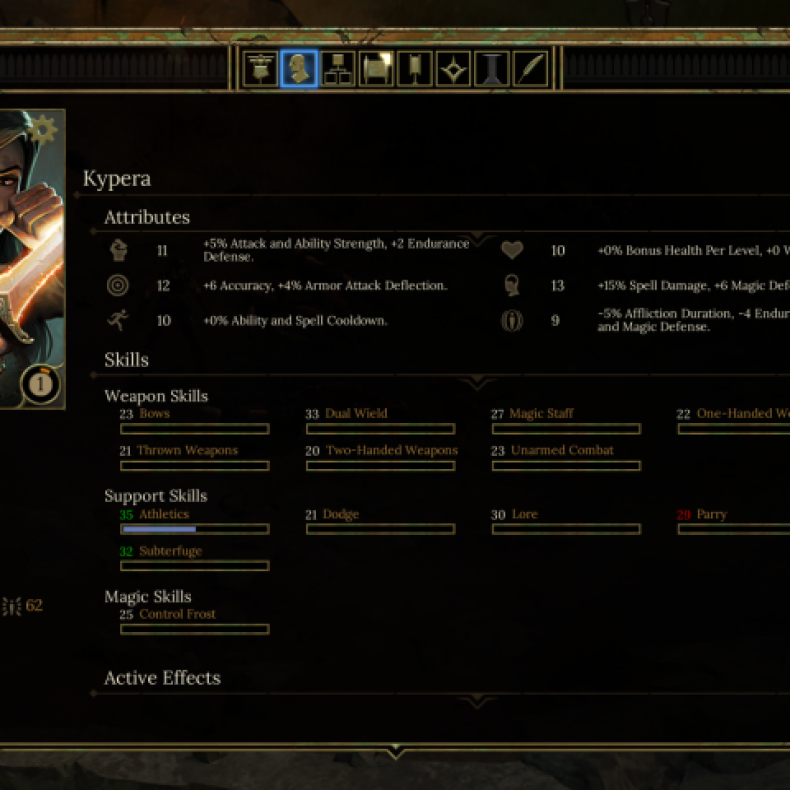 The second dev diary from Brian Heins about the upcoming game Tyranny has come. In this one, he outlines the skills in the game, as well as specifics as to what they are, and how you progress in getting them as your character. You can read the full dev diary here. Below is a section focusing on the progression of skills:

“I wanted skills to increase as you use them, rather than spending skill points at level up. This meant a fundamental change to how character progression worked. In Eternity, characters gain experience as they complete quests and objectives. Individual combat encounters or conversations had no effect on level, unless they advanced a quest.

With the decision to increase skills by use, I needed skill gains to contribute towards character level. Otherwise you could theoretically have a character with a hundred ranks in a skill, but still technically considered ‘level 1’. So, in Tyranny as you use skills they gain experience. When they gain enough experience, they increase their skill rank. When a skill increases in rank, your character gains experience towards their next level.

A benefit of this is that it makes even optional combat encounters rewarding for the player. This change could have made conversations less rewarding, as players would need to fight in order to level up their characters. To resolve this, we added functionality to allow players to level up their skills in conversations. Player choices that are gated by skill requirements will add experience to those skills when they are used. Additionally, if you use a skill to intimidate an encounter into fleeing, we grant skill experience to the party equivalent to what you would gain if you fought them. It can’t be exact, as there are too many decisions that players can make during combat to replicate it exactly.

So, your characters gain experience as their skills increase in rank – whether it’s through combat, conversations, or interacting with objects in the world. You also gain some experience for completing quests and objectives, though it’s a smaller portion of your overall experience than it was in Eternity.

As your party members increase in level, they can improve their Attribute scores and purchase new Talents from Talent Trees. Your character has 6 distinct trees to purchase talents from, while your companions have their own unique trees.”

Check Out New Gameplay Footage for Obsidian’s Tyranny!
Be the first to comment!
Leave a reply »