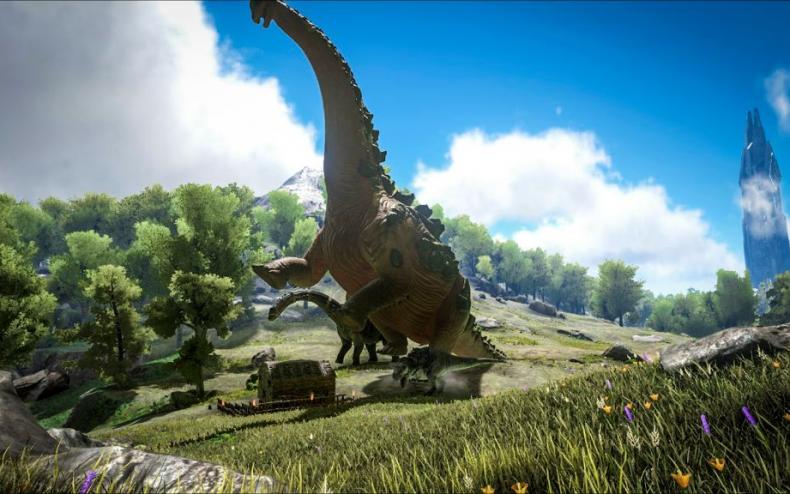 The biggest addition with the update is the Titanosaur, a gigantic creature that’s the largest ever in the game. It operates as a mobile super-fortress and can carry large amounts of weight, structures, defenses and creatures on its back. It’s basically a walking mountain of an herbivore. It crushes creatures and buildings in its path.

The new Redwood Biome is filled with lush, giant and sturdy trees. Players can build treehouses and villages in this biome and also harvest lumber from the trees to create a fortress high in the air. There are also new wood and metal tree platforms. Players can also tap into the redwoods for sap using the Tree Sap Taps. There’s also the Retractable Rope Ladders. Also, here’s a full breakdown of content for the update (Courtesy of Studio Wildcard):

New Item: The Chain Bola ammo for ballista turret! Bring huge creatures to their knees, temporarily, by entangling them in these gigantic metal bolas.
New Item: Gas Mask! Avoid diseases and poisonous gas with this protective breathing apparatus.
New Item: Herbivore “TastyCakes”
New Structure: Retractable Rope Ladders! Extend or retract these flimsy ladders, good for letting allies onto your ramparts while keeping the enemy out.
New Structure: Tree Sap Taps! Slowly extract valuable syrup from the great redwoods for use in a variety of new recipes.
New Mechanic: Custom Tripwire Alarm Notifications via SurviveTheArk.com (E-mail and Forum). Optionally Tribes can post to arbitrary URL, if they have a custom system! Now if someone’s raiding your base, you can get on top of it!
GroundClutter effect extended 50% further and +20% more GPU efficiency
Balled Doed’s are no longer invincible to Tamed Dino melee attacks — now just very, very resistant to them.
Magnifying Glass now displays creature Torpor stats (on Wild creatures too).
Tribe Alliances now disabled in Offline Raid mode (too complex to determine if anyone in an Alliance is around), C4/Traps can no longer be placed near Offline-Raid Protected Structures, and Offline-Raid mode now forces all Structures to be Lockable so that players can “Lock” Crop Plots to prevent their turrets from being disabled.
New Server Option: “?PreventTribeAlliances=true” to prevent tribe alliances
Engagement with Wild Naturally-Fleeing & Small creatures (tiny bugs etc) no longer trigger combat music
Tamed Dinos that are following a submerged allied Target will not attempt to float to the surface of the water, but rather will attempt to stay at the depth of their allied Target. (helpful when deliberately going deep-diving your tamed land Dinos). However, Dinos that are capable of suffocating will try to surface if they are out of Oxygen regardless!
Vaults can no longer be dropped onto saddle platforms
Transfer-All/Drop-All methods now only drop/transfer what is currently disabled in the inventory, respecting any filters/folders you may have active (so for example, if you’re within a folder, it will only transfer those items, or if you have a text filter active, etc).
Fixed an issue where pillars were not being calculated correctly as foundations when building pillars downwards
Massive +33% rendering gains with any translucent rendering (particles, greenhouse windows, etc).

ARK: Survival Evolved is available now for Windows PC via Steam Early Access. It’s also playable on Xbox One through the Microsoft Game Preview. A full launch is planed for Xbox One and PlayStation 4 with Morpheus support for later this year. You can check out a new trailer for the update below.