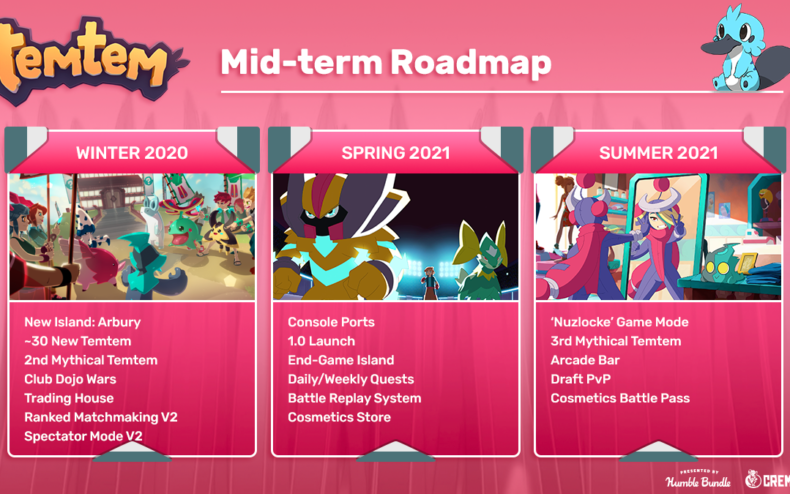 So what comes next for Temtem? Crema promised more info yesterday and how fast did they deliver it? Fast enough to satisfy us, with a content projection that stretches into the summer after next….though Crema cautions that with predictions this far out, the dates could be subject to change.

When we last left off, we learned what is in the works for Temtem through the fall of 2020. Now here’s what to expect next holiday season, and beyond….

The Dojos are a cool idea. Each island will have one Dojo, and Clubs will battle it out for the right of ownership. Once a Club takes control of a Dojo, they will be awarded exclusive prizes, and can decorate the Dojo as they see fit. Tournaments will be held on a weekly basis, though, so the Dojos will be redecorated frequently.

Spring of 2021 is when Crema will consider Temtem “done,” though not complete. The game will move out of Early Access and the console versions will launch. They haven’t said which ones will get it, and by 2021 the PS5 and Series X will enter the picture. I’m sure we’ll learn more about this once we’re closer to that date.

What’s a Nuzlocke? It’s a mode where once your Temtem falls in battle, it actually DIES and you can’t use it anymore. It is hardcore in other areas as well, which vary (this is usually seen in hacks of Pokemon games). Some people might cry foul at this, but others love it, so….it’s optional.

Crema elaborates further on future features in their new blog post. As for demanded features that aren’t on the list, cross-saves and cross-play are near the top, and they say they will look into it before Temtem goes multiplatform in 2021.

Temtem is available now for PC, in Early Access form.