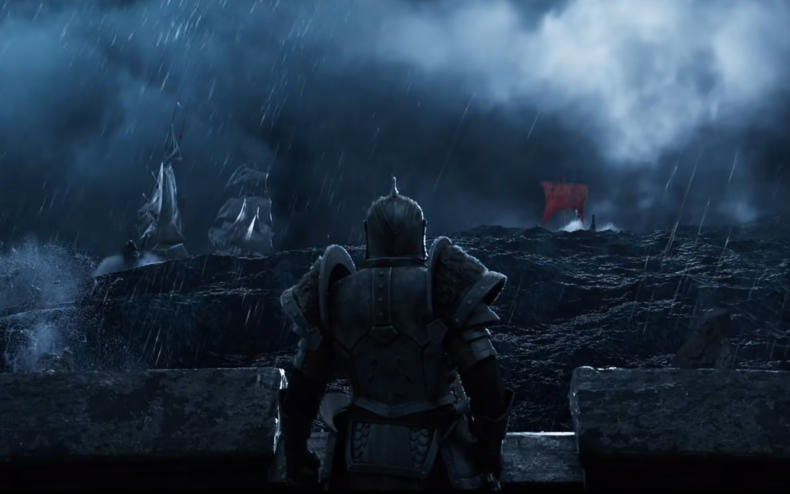 It’s official that High Isle will be the next expansion to Elder Scrolls Online, but what will players find once they get there? What’s the expansion all about and what does it bring to the world that’s new?

At the moment, High Isle has yet to be released. Bethesda promises more information at launch, but that is a while away. Prior to the ESO 2022 Global Reveal, the most the developer revealed visually was this one-minute teaser showing off the environments and hinting at its plot.

The video’s biggest tease is that of a knight grabbing his sword, trudging up a flight of rain-soaked steps, and staring out at two ships sailing in his direction as lightning dramatically illuminates them all. Obviously, this is hinting at some kind of war, but what kind?

We believe it’s another faction war and that the knight in shadow could be Breton. The one good look we get at the High Isle shows off quite a few buildings that are Breton in style, and if you squint, you can make out faction banners on the ships that have appeared in the game previously.

Bethesda had previously stated they would focus their next expansion on a race that has yet to be the subject of an expansion plotline. Only three fit that requirement: the Bretons, the Redguards, and the Wood Elves. Through the process of elimination, we can point to the former as the likely subject. The story of High Isle, according to Bethesda, will be smaller and more political than the world-threatening plots of the last few chapters.

It’s typical for ESO to introduce new features with each expansion, like extra skills or classes. Fans are already trying to guess what they could be. PvP content and a new class are the most desired. Bethesda could be hinting at PvP with the two ships, but nothing has been confirmed. Expansions usually introduce at least one new type of gameplay, along with new dungeons released on a quarterly basis.

During the ESO 2022 Global Reveal, it was confirmed that the next ESO chapter would be High Isle. The Elder Scrolls Online development team is focusing on the Breton race and diving deep into their medieval-style culture and history. According to Rich Lambert, ESO’s creative director, “We chose High Isle as the location for our next chapter because it’s a large departure from anything we’ve done over the last few years.” He continued, “High Isle is the epitome of the chivalric Breton culture–a resort-like island for their nobility, with towering cliffs, pristine beaches and loads of ancient ruins to explore.”

“In addition to the unique biome and aesthetics, this island chain has never been explored before in any Elder Scrolls game, so having the opportunity to add to the rich lore of Elder Scrolls and explore a completely new location is really exciting!”

ESO’s art director CJ Grebb says, “We always strive to make sure each new chapter has a signature look, and with High Isle, that became a little easier when we were told that the Systres is sort of the resort island for the upper crust of Breton society,” explains Grebb. “With this in mind, we took inspiration from the beautiful sands and rolling hills of the Mediterranean coast.”

“We were also tasked with creating an abundant, overgrown biome for the prison Island of Amenos, and with that work came figuring out the mysterious local druids and their ancient ties to the entire archipelago,” continued Grebb. “We went with a lot of broad-leaf flora for this area, concentrating on lush ferns and overgrown ivy and moss as much as could be afforded.”

“With High Isle and the Legacy of the Bretons, the team is going back to its story-telling roots,” Lambert explains. “We will be focusing on exploring Breton culture and telling a more grounded, politically charged tale rather than the ‘world-ending apocalypse-type’ story that we’ve done the past few years. It’s an exciting tale that fits extremely well with the Bretons–they are a feudal society where nobility and courtly politics are the norm.”