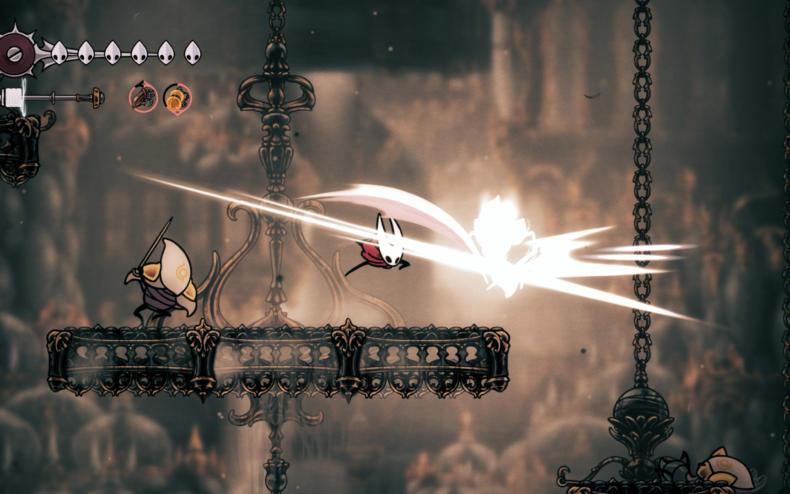 If you missed the XBox Bethesda Showcase last weekend, what did you miss? Quite a lot….but don’t panic, we’ve got all the best parts and all you have to do is keep reading…what games await in the next twelve months?

One year ago, Bethesda showed off an open-world FPS they called Redfall. This year we got to see a lot more of the game as well as a promise for a summer release, so it’s not too far off. The simple plot (at least on the surface) is that the town of Redfall, Massachusetts has been overrun by vampires, and you and your monster-hunter friends are the only ones who can take them down. You’re not just armed with just wooden stakes and guns, but magic powers. Redfall is designed to be a co-op experience, but supports single-player. It will arrive on XBox Series S|X and the PC in the summer of 2022.

The original Hollow Knight is one of the most shining, standout entries in the 2D Metroidvania genre, and its sequel is one of the most anticipated games around. We got a nice new look at Hollow Knight: Silksong and Microsoft confirmed that it will be part of Game Pass the VERY DAY of its release. When’s that? We wish we could report THAT part, but they still haven’t revealed when this game is coming out. All we know is, probably within 2022. Or the first half of 2023.

Will you look at that — Rick & Morty’s Justin Roiland just made a first-person shooter. What does that kind of blend produce? It produces the kind of thing where your weapons have faces and they won’t stop talking to you. It’s also got a very Roiland-y plot: A race of stoner aliens have discovered kidnapping humans and processing them into sludge gets them super-high, and you’re the bounty hunter hired to exterminate them all so they stop free-basing your brethren. Expect the same bug-eyed character designs and inane ramblings that are trademarks of the Roiland brand. If you squanch those things, High On Life may be the slimy ticket for you.

Riot Games, makers of the iconic League of Legends among other things, confirmed during the presentation that their library is headed to Game Pass on PC. And to give first-timers a head start, League of Legends and League of Legends: Wild Rift will have all Champions unlocked, Runeterra will have the Foundations Set unlocked, Teamfight Tactics will have Select Little Legends unlocked and Valorant will have All Agents unlocked. But I guess you could have gathered that from the video thumbnail.

A Plague Tale: Requiem is coming to XBox and will be available on Game Pass the day of release. It’s the sequel to the 2019 survival adventure Plague Tale: Innocence, which was about two orphans trying to survive in the time of the Black Death. They lived long enough to become the stars of a second game. As anyone knows from the original, trying to keep this pair healthy isn’t easy. Look for it on XBox consoles and PC later this year.

Overwatch has kind of slipped in popularity, but Blizzard Activision has plans to juice it up later this year with the official sequel. Overwatch 2 doesn’t look like it’ll be changing much of the core gameplay, but there will be new characters like Junker Queen, introduced in this video. OW2 goes into Early Access October 4.

While it’s predictable we’re getting another Forza, the unusually long wait time has been unexpected. Car games are usually the best way to show off a new console’s graphics capabilities, as cars are easier to render realistically than people. And this Forza is the prettiest one ever, with real-time ray tracing, procedural and visible damage on your vehicle, dynamic weather and time of day, and a whole lot more. We’ve still got a long wait, though — Forza Motorsport won’t be here until the spring of 2023.

Morza Forza: the latest game in the series to be released, Forza Horizon 5, will be getting an expansion while you wait for Motorsport. It’s another Hot Wheels tie in that will let you use a lot of their cars and twist them around crazy tracks. You won’t have to wait quite as long for this one; it’s due July 19.

If any place looks worse to wander around in than plague-ridden France, it’s the icky hell dimension shown in the footage for Scorn, Ebb Software’s upcoming survival horror game. You don’t know who you are, but from the look of your hands you must be a mess…you just woke up, pulled tubes out of yourself and decided to explore around. The whole presentation looks very Giger-inspired and it will be playable on XBox this October.

A44 Games, previously behind Ashen, are now working on Flintrock: The Siege of Dawn. You take control of warrior Nor Vanek, who’s discovered a portal into the supernatural world….and with that access, she plans to slay the gods who have plagued her land. A44 thinks it can get this one out sometime in early 2023.

Here’s the latest Minecraft spinoff: an action strategy game called Minecraft Legends. From the trailer, it isn’t clear exactly how you control this one, but the short of it is you’ll recruit an army of willing participants from the otherworld and take them down to fight against invaders. The game will include both a single-player campaign mode and online co-op. This one should be ready sometime in early 2023.

The one title shown that was closest to release is Naraka: Bladepoint, a battle royale set in ancient China. Sixty players are set up in each match, and the last one standing wins — typical for the genre, but with the twist of there being a power-up that turns you giant-size and makes you an unstoppable force for a few moments. It has the side effect of making you an easy target once it wears off, though. Naraka comes to XBox June 23.

Now here’s something different: a 2D RPG with medieval parchment paper graphics. It’s Pentiment, the game where you play as Journeyman Artist Andreas Maler during a time of great social unrest in 16th century Bavaria. How’s that for original? The story-rich game has several branching paths and each playthrough is different depending on your choices. It’s coming to us from Obsidian.

When you get tired of shooting and slashing things, take up farming in Lightyear Frontier. What makes this one different from other farming sims is that an element of exploration is added: while you’ll have your daily chores and duties to attend to, there’s also a lot outside your farm that could help you out if you can find it. The game will debut on Steam Early Access and Game Pass at the same time, in the spring of 2023.

The Persona series is finally making its way to Microsoft consoles, with the definitive versions of Persona 3, 4 and 5 all hitting within the next year. The first will be Persona 5 Royal which will arrive in October on Game Pass. If you’ve never experienced any of them before, you’re in for a good time.

Finally, the game everyone was waiting for: Starfield! Bethesda’s most anticipated title of the next twelve months looks great. The gameplay footage began with the player and his robot sidekick exploring an alien landscape and confronting a base of space pirates. We were shown the character creator and the extent to which you can customize your ship. Content will be massive with over 100 systems and over 1000 planets in the galaxy at launch. Said launch won’t be in 2022, but we’re closer than ever.