Early Access for H1Z1 on pc has been going strong since earlier this year, with plans for a ps4 release. Here are some reasons why you should play this post apocalyptic MMO.
Originally a Sony Online Entertainment (SOE) project, Daybreak Games has taken over and are vigorously working hard to bring you new content as they work up to a final release.
Playing on a PvP server, you drop in randomly, vulnerable, with only the clothes on your back. I’ll tell you right now, you will need to be aware and either craft a weapon or search for a gun to defend yourself, because this is an unforgiving environment and many players will try to kill you on sight.
We will get in to crafting later. Right now I want to tell you about Battle Royal, the most popular event in the game by far. You can go solo, or pick a buddy to assist you as you drop into a server with 50 total players, all competing to be the last man standing. When I say say drop in, I literally mean you drop in by parachute, aiming for the more urban areas. As soon as you hit the ground, it’s game on, so be aware as you search houses and other structures for guns, ammo, food and water. You will see an on screen notification every time a player dies, telling you how many are left. As if that wasn’t enough of a challenge, a count down begins, letting you know that toxic gas will be released. All players must get to the designated safe zone. This brings the battle closer together and if you have made it this far you will see the number of players falling rapidly, as they encounter death at the hands of other players, or succumb to the toxic gas that constantly makes the safe area smaller and smaller. As all remaining players are forced to one area of the map, gunshots can be heard everywhere, and you have hopefully gained enough supplies to bandage any wounds and shoot anyone you see. Be one of the last ten standing in solo, or five in team BR and you will win a prize, as long as you die in game and do not exit early. Daybreak will reward you with mystery bags that contain cosmetic items such as different shirts and trucker caps. Show them off to your friends, or go sell them on the steam marketplace. Stay tuned as we cover more H1Z1 and work up to our Fallout 4 release hype. 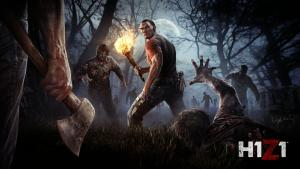 H1Z1 Pro League Poised to Bring Fans Greatest Esports Battle Royale of the Year
Be the first to comment!
Leave a reply »